Home Blog Major Criminology Theories and How They Affect Policy

What is criminal behavior, and what causes it? How a society answers these fundamental questions plays an essential role in how it responds to crime, from developing crime prevention programs to designing incarceration systems and rehabilitating criminals. As part of this effort, criminologists and experts across related fields such as healthcare, sociology and psychology work toward an understanding of the causes of criminal behavior, both by proposing new theories and testing existing ones.

Each of the following theories has evolved with the advent of more sophisticated technology and the current trend toward examining criminal behavior, and they’ve also been impacted—albeit at a slower pace—by changes in public policy. 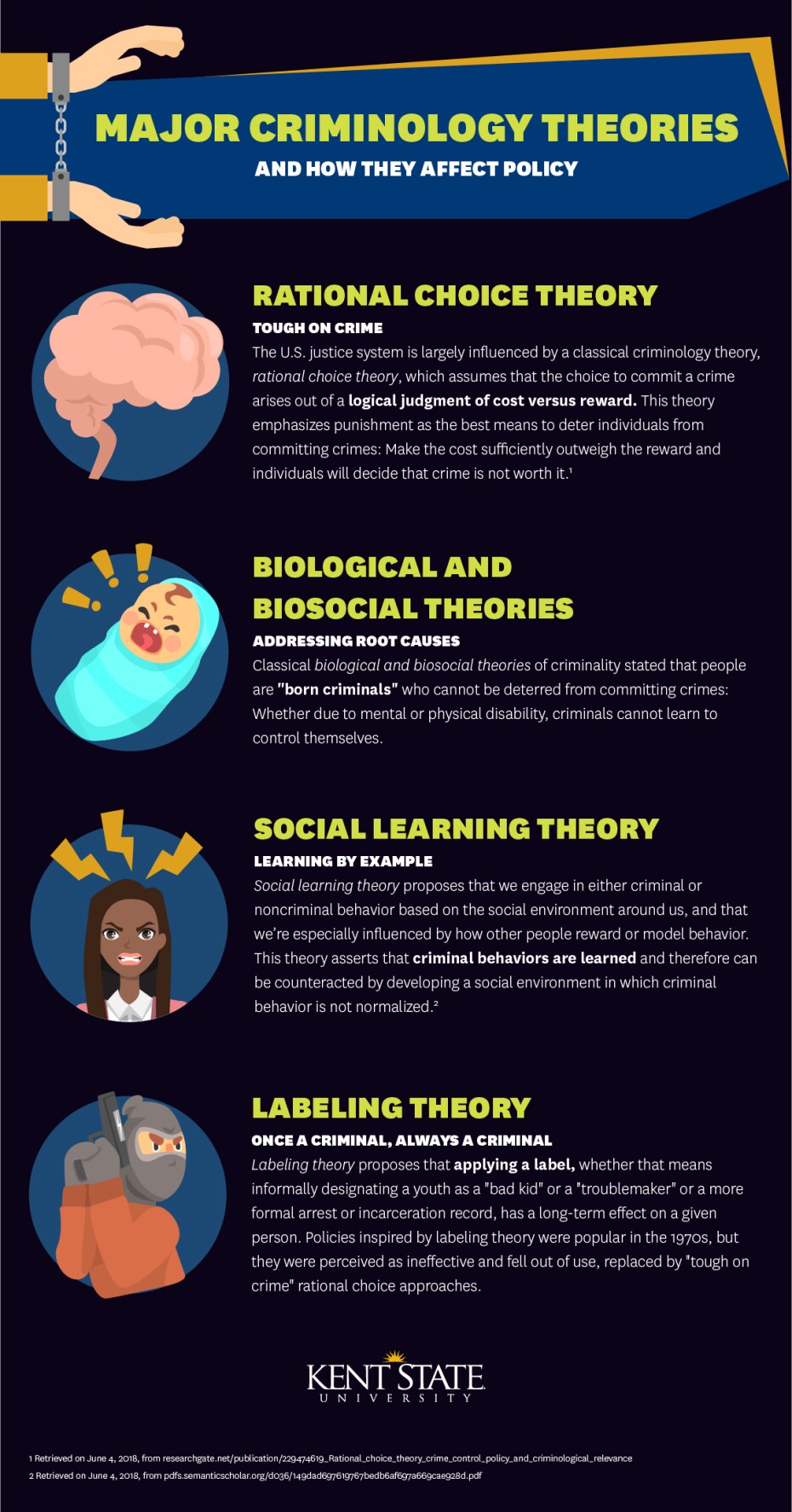 The U.S. justice system is largely influenced by a classical criminology theory, rational choice theory, which assumes that the choice to commit a crime arises out of a logical judgment of cost versus reward. This theory emphasizes punishment as the best means to deter individuals from committing crimes: Make the cost sufficiently outweigh the reward and individuals will decide that crime is not worth it.1

On one hand, this seems reasonable, almost obvious. But a number of factors complicate such a simplistic understanding of crime and human nature:2

Classical biological theories of criminality stated that people are "born criminals" who cannot be deterred from committing crimes: Whether due to mental or physical disability, criminals cannot learn to control themselves.

In contrast, contemporary biological theories emphasize biosocial causes rather than strictly natural ones.

Some modern criminologists do consider genetic predispositions (including testosterone and IQ levels), but they look at the interplay between these factors and a person’s social environment rather than focusing on seemingly immutable traits. By foregrounding social factors, these criminologists theorize, we can mitigate risks of criminal behavior prompted by biological factors.3

Policies based in this theory often start at the root of the problem—for example:

This theory is most frequently used as the basis for supportive, less punitive programs that serve juveniles, such as:

Labeling Theory: Once a Criminal, Always a Criminal

Labeling theory proposes that applying a label, whether that means informally designating a youth as a "bad kid" or a "troublemaker" or a more formal arrest or incarceration record, has a long-term effect on a given person. Policies inspired by labeling theory were popular in the 1970s, but they were perceived as ineffective and fell out of use, replaced by "tough on crime" rational choice approaches.

Contemporary research has shown evidence of the profound impact that labeling can have on individuals, as formal labeling has been shown to have a measurable effect on juveniles' future education and employment opportunities—repercussions that can lead to continued criminal behavior.5

Policies inspired by labeling theory thus focus on reducing negative repercussions of prior labels and providing opportunities for new growth. Examples include:

Through these and other criminology theories, experts in many related fields, such as psychology, law enforcement and public administration, collaborate to create a safer, more just society. Whether you currently work as a criminal justice professional or are looking to enter the field, learn how Kent State University’s online Master of Arts in Criminology and Criminal Justice can equip you to make a difference in the world through research, corrections, security and policy.